The topic of Japanese knotweed encroachment from neighbouring land has become increasingly litigious. This is understandable given that financial institutions levy more onerous requirement on a property loan where Japanese knotweed is present. This in turn has led to the devaluing of property as the amenity value is often seen as compromised. 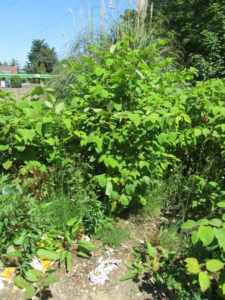 Back in April 2017 there was a landmark court case of Waistell v Network Rail Infrastructure Limited (2017) and, in what is thought to be the first decided claim for damages arising from the existence of Japanese Knotweed on a neighbour’s land, was found in favour of the claimants Waistell and Williams. This was picked up by the BBC.

Network Rail appealed against this judgement and this came back to the courts in June 2018. The judgement was upheld and the appeal dismissed. Dorothea Antzoulatos of Charles Lyndon a London litigation firm wrote. “Although the Court of Appeal has found that the mere presence of knotweed on an adjoining property is not capable of being a nuisance it did find that once it has encroached onto another property that this does amount to physical damage and an actionable nuisance.  This is important because it confirms individuals’ entitlement to diminution of value or the cost of removing the knotweed and any residual diminution of value once we prove that the knotweed has encroached.  Network Rail have 14 days in which to appeal, but the decision of the 3 Court of Appeal judges was unanimous and we are confident that if they do appeal any appeal would be unsuccessful.”

Their full article can be found here.

This will prove to be a very interesting precedent for our clients as we come across cases where vendors have deliberately obscured the fact that a property is blighted by Japanese knotweed, and only in the spring does the full extent of an infestation become evident.

PBA Solutions have been involved in cases acting as expert witness for clients in similar situations. After an initial survey of the land where we document the site visit with photographs, video and trial pit investigations, we then undertake laboratory botanical identification of root samples. All this is then compiled into a findings report. On instruction from the client or Insurance company we then prepare a CPR report (Competent Persons Report) that is used in stating the position of the claimant.

In the Network Rail case Mr Stephen Williams and Mr Robin Waistell were the respective freehold owners of adjoining semi-detached bungalows located in Maesteg, South Wales. They had initially contacted Network Rail in 2013 regarding the presence over many years of Japanese knotweed growing in their land and became increasingly frustrated with the lack of action being taken.

Network Rail’s land is extensive, occupying not only 20,000 plus miles of track, but stations and additional land surrounding these. Back in Victorian times Japanese knotweed was introduced to the railways as the plant was seen as a good method of stabilising newly created embankments. Since that time Japanese knotweed has been able to establish along the rail network.  In the Messer Williams and Waistell case it was locally know that the Japanese knotweed had been on the railway land for over 50 years.

While Network Rail undertake a schedule of weed spraying along the railway lines, this is too generic and inaccurate to control the Japanese knotweed on their land. It is therefore up to the neighbours of Network Rail to work with them to get any local infestations addressed.  In this case, Network Rail’s treatment of the Japanese knotweed was inadequate and unreasonable and in breach of their duty as a landowner. It was deemed that it was a “breach of duty (that) had caused a continuing nuisance and a diminution in the value of the properties so as to found a successful claim in private nuisance.”

If you are concerned about the encroachment of Japanese knotweed into your property from neighbouring land do call us for an informal conversation on how we may be able to help you.