Case Study: The removal of Staghorn Sumac and garden remediation

Staghorn Sumac (Rhus typhina) had spread into a Sovereign Housing resident’s garden, out-competing other vegetation and overrunning their outdoor space. This made the garden unusable for the tenant of the housing association, and was a source of concern for both client and tenant.

Attempts had been made by another party to grind-out the stump of the Staghorn Sumac tree that was previously present, and to treat the remaining suckers/roots. When this this proved to be ineffective, the client called PBA Solutions with the aim of restoring the garden to a usable state for the tenant. 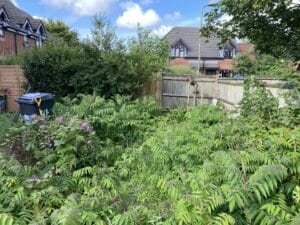 What is Staghorn Sumac?

Staghorn Sumac (or Stag Horn’s Sumach) is not listed amongst the 36 official invasive Schedule 9 plant species in the UK; however, it is does have invasive characteristics that are even recognised in its origin countries of North America and Canada. The plant can spread via seeds and by sending out new suckers, both of which are aided by our mild British winters.

Whilst an attractive deciduous shrub, with yellow/green flowers, crimson fruit heads and autumnal red leaves, cutting the shrub back can often send it into survival mode where it sends out several suckers (rhizomes) below the lawn to establish new clones. Initially, in the new plant’s (clone’s) first year, it simply sends up a single shoot but over time these increase and become higher, shading out competing plants and easily overwhelming a small garden.

Based on the client’s need to quickly resolve the tenant’s problem, PBA Solutions looked at the characteristics of the plant to form the foundation for the remedy. The roots of most Sumac species typically run quite shallow beneath the surface of the ground (typically around 250-300mm in depth), PBA targeted this plant characteristic for the solution.