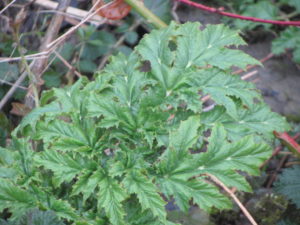 When you are out walking and you spot something you know to be potentially dangerous like Giant Hogweed growing, what do you do?

At this time of year Giant Hogweed is on the rise and NOW is the best time to take action against it. If left to grow it will become a monster in size and very dangerous if touched.

The RHS website states: WARNING: The sap of Giant Hogweed contains a toxic chemical which sensitises the skin and leads to severe blistering when exposed to sunlight. THIS REACTION CAN RECUR FOR MANY YEARS. https://www.rhs.org.uk/advice/profile?PID=458

Just a quick Google search will reveal the horror that people have experienced when they have touched this dangerous plant. News articles are published all the time showing photos of injuries sustained from Giant Hogweed. 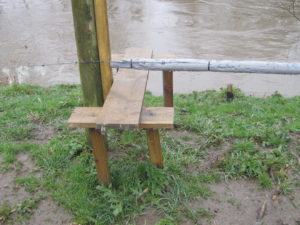 So one fine Welsh day I was out walking beside the River Severn near Garthmyl, between Montgomery and Welshpool and I was astonished to see the early growth of Giant Hogweed along a section of the bank. Most alarmingly it was growing under and around a newly installed stile.  What to do? I warned my fellow walker and suggested we try and contact the Fishing Club who had installed the stile.  I suggested at the very least that a card should be pinned to the stile with a warning, but was told the cows would eat it. (Good point.)

In these photos it may not look much now, but the flower spikes can grow to over 3 meters and anyone trying to use this stile will find it impossible.  The danger will be to those who think they can still use the stile while the Giant Hogweed is growing up around it.

Several attempts have been made to contact the fishing club who have the rights along this stretch of river, but to no avail.  Emails and posts on chatrooms have also been made. Eventually I was contacted by an Angler who fished a lower reach of the River Severn who said he is always spraying Giant Hogweed plants, but they reoccur every year. Now we both know where the fresh seed is coming from. 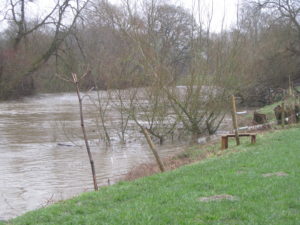 While it is not an offense to allow non-native invasive species to grow on your land, it is an offense to allow them to spread onto neighbouring land. Under the Wildlife and Countryside Act 1981, SCHEDULE 9 you must not plant or cause to grow Giant Hogweed in the wild.

Giant Hogweed is classified as an invasive species and it is the responsibility of the land owner to prevent the plant spreading to neighbouring land or into the wild. The removal of plants must be conducted with due care and attention due to their harmful nature.  To do this employing a specialist invasive plant company can take the worry off your shoulders. You can contact us via the form below in order to arrange a site visit and a management plan for treating Giant Hogweed.